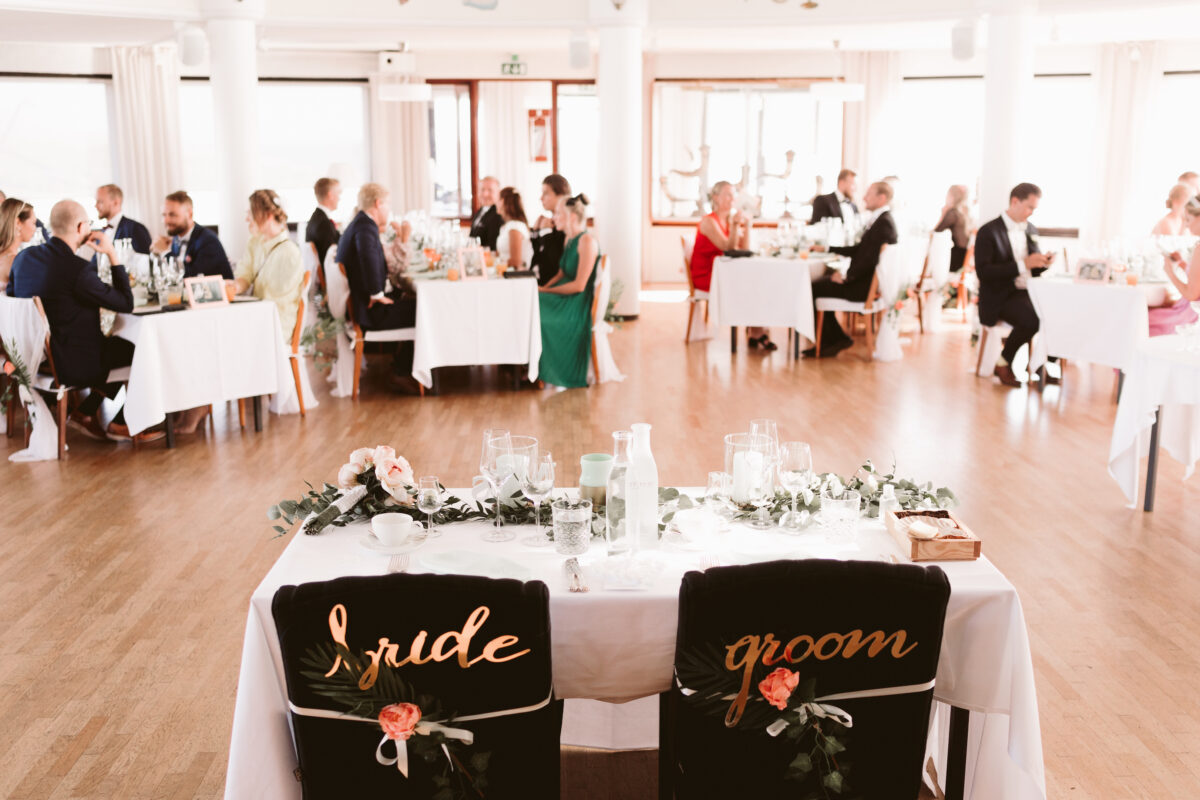 We sat down and raised our glasses. My mom said a few words to welcome our guests to the wedding and to welcome Eerikki to our family. She also spoke a few words from Kalevala in respect to my late grandmother to whom it was very dear.

We had decided to celebrate our wedding among adults only so the only children there were our nephews, it was important for us that they would be present. I had made them activity books so that they wouldn't get bored.

Eerikki's family dined on the terrace as they wished to keep some distance due to corona, which is totally understandable. After the main course, Eerikki's sister read the speech their father had written and then the bestmen gave their speech together. The bestmen's speech was also really lovely and funny though in the picture they look like they're about to fall asleep. I promise we didn't work them so hard that they wouldn't have had energy left for the wedding :D

After the speech it was the "Robbing of the Bride". While it is traditional at weddings I wasn't very into it, but Eerikki thought it would be fun so we agreed to have it. What had been planned was absolutely amazing, let me tell you all about it!

I was taken to the lobby of HSS so that I could see what was happening. One of the bestmen, Tommi, began asking the guests, what should Eerikki do to get his bride back. He chose the suggestion that Eerikki should rap. For a song he chose Supervoimii by Elastinen. Everyone who knows Eerikki knows that he loves to rap. Tommi also asked if there was anyone musical among the guests to help Eerikki out and my sister and MoH's boyfriend Tommi (also) said he can help out.

So Eerikki and this other Tommi were given three minutes to prepare a rap performance. I was sat down in the middle of the room. What I didn't know, nor most of the guests either, is that Eerikki had prepared a song for me and had been practicing all summer long as while he definitely can rap, singing isn't quite that easy for him..

Tommi had brought his guitar to the wedding for this, which I hadn't realized. So, Tommi started playing and Eerikki started rapping and it became quickly clear that this was not something that they had put together in 3 minutes. I remember the moment when it was time for the chorus which was in singing and I was thinking uh oh, I wonder how this is going to go and it went so great! Eerikki sang so beautifully with Tommi helping out in the background. I couldn't believe Eerikki had wanted to sing for me too and that he had practiced so hard to do it well. I also loved the fact that it was my sister's boyfriend who was there helping him out. For me, weddings are also about family coming together and it was so sad that some of our relatives had to cancel due to corona. So this, them singing there together, somehow felt like bringing our families together and I really loved that.

I'm not going to translate the lyrics that Eerikki wrote in english as that would be a ton of work. The name of the song is SuperSissi :). If you want to translate it yourself, the lyrics are below.

By the end of the song we were all standing up clapping our hands the performance was amazing and I felt so honored to get such a beautiful song.

After this we gave the floor to anyone who would like to give a speech. There ended up being a lot of people who wanted to say something which was wonderful so we decided to skip the "shoe game", another wedding tradition, so that we would have time for all the speeches.

Then we went outside to take group pictures and more pictures with just Eerikki and I.

There ended up being a little incident while taking our pictures... I'll tell you all about it next time! :D