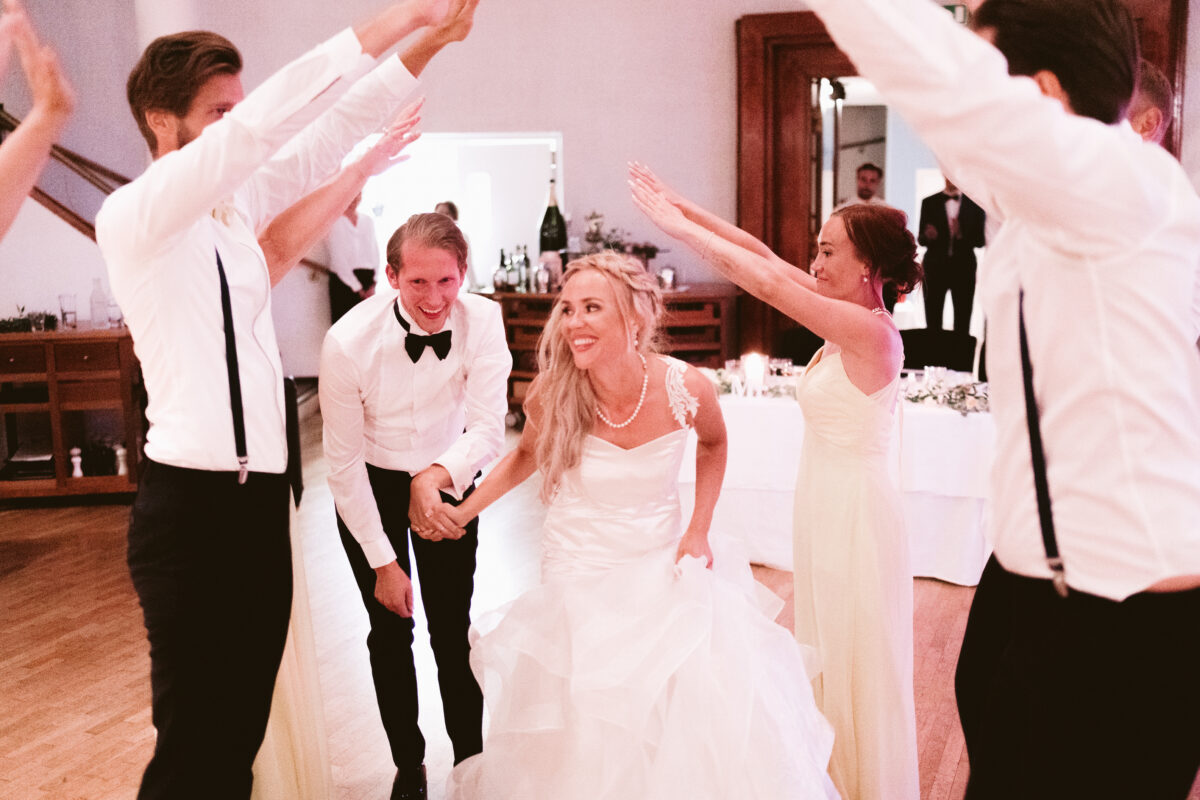 We went outside to take group pictures which ended up taking quite long as we wanted to take a picture which each group of friends and family.

Once we had taken all group pictures we got ready to take a few more with just me and Eerikki. Our photographer found a pretty place for the photo shoot and asked if I can climb up there. I faced the same challenge I told you about in The morning of our weddingpost so Eerikki suggested that he'd lift me up there. We all thought it was a good idea so Eerikki picked me up and started climbing. A small problem none of us had prepared for, the rocks were really slippery, Eerikki had shoes with leather bottoms and tuxedo pants that weren't exactly flexible... So, it might not be too surprising that we fell straight on to the rocks. My first though was that oh my gosh, I'm sure I ripped my wedding dress, the next one was that it's probably covered in blood and mud. Eerikki had tried to fall underneath me but my left arm had tried to break the fall and was quite sore. Eerikki was naturally really shocked and sorry and the last thing I wanted was for him to feel worse. I ensured him that all was fine, especially as I found that the dress wasn't ripped or dirty. However, my left arm had a big open wound, my finger was bleeding and I could barely move my little finger :D This may seem like an odd place for a smile emoji but we realized pretty quickly how funny the situation was. We had all thought this was a good idea, he wasn't drunk or hadn't done anything wrong, it was his outfit that had failed him. As all was fine we concluded that this was quite a comical thing that would only happen to us.

The funny thing was that while we were trying to get up after the fall and figure out if we were still alive, our photographer came to us excitedly saying "I got some great pictures of that!". It was the best comment in that situation and really showed his passion for his profession and still makes us laugh :D

Once I had ensured Eerikki I was fine and this wasn't in any way his fault we took the pictures and headed inside for the cake.

Even though we were laughing that this will be one hilarious memory from our wedding, we were still quite shocked. Something horrible could've happened and we were pretty shaken up still. We were so confused after it all, we could barely figure out how to cut the cake and I remember when we were sitting at our table eating cake we kept going through what had happened and kept telling each other and ourselves that everything was ok.

We had a champagne tower with the cake, another long time wish of mine to have at my wedding.

In addition to cake, we also had a candy buffet. We chose the candies by taste and color as I wanted them in theme colors too.

In hindsight, I should've asked the staff at HSS for disinfectant and a butterfly bandage but I was still so confused that instead I asked my niece and makeup artist to help me figure out how to best hide the wound. After the cake we went to the bathroom to see what could be done to it but in the end came to the conclusion that the only thing we can do is put a bandaid on it to cover it a bit. My little sister/MoH came to help out too but she was more interested in the find that her dress had pockets which she was very happy about so my last worry about the fall was lifted on that bathroom trip when I was laughing at my sister's excitement about her newfound pockets when the bride had her arm open :D

After the cake it was time for our wedding dance, you can read more about it from the wedding dancepost, ps. see if you can spot my bandaged arm in the pictures :D.

The wedding dance went surprisingly well and most importantly, we really enjoyed it. After our dance we had a surprise number. I had asked the wedding party that we'd do a surprise dance together after the wedding dance. This idea was received with shocked looks but in the end I got my way and we were practicing the dance through summer. So, once our wedding dance ended "Everybody dance now" started which was a sign for the wedding party to join us on the dance floor. We danced our choreography to a mixed song I had made and while a few glasses of wine may have led someone forgetting their timing or steps every now and then (and I almost tripped on my skirt once), we had a lot of fun and the guests started clapping and seemed to enjoy the show. Though everyone had been against my idea of doing a dance number together, after the performance they all said it had been so much fun and they were happy we did it :)

After the performance started our band, Bilebändi Vamosplaying. The had a great setlist, which is why we chose them and we were also able to ask for a few additional songs. We had a few boxes of golden ballerinasfor guests as we wanted to ensure our female guests could enjoy the night without having to worry about sore feet in heels.

We had requested that the band would start with a waltz as I like traditions and it was important for us that Eerikki could ask my mom to dance too. Once Eerikki and I started dancing we realized that we could not remember at all how to dance waltz! We had only been practicing our rumba and even though we had planned to practice waltz, for this exact moment, we hadn't had time for it and so we were there on the dance floor laughing that there's nothing we can do anymore, just gotta fight through it. Luckily towards the end of the song, Eerikki started remembering how waltz goes, so my mom got to dance something that at least resembled waltz :D

Once our wedding dance was over, there was nothing left to be nervous about. I finally took a good glass of wine and got on a party mood. The band quickly put some party songs on and people started to get on the dance floor. We sang and danced until it was time for the band's first break, during which it was time for the last part of the program, throwing the bouquet and garter. I threw one of the bridesmaids bouquets and we had brought a mint green garter for Eerikki to throw.

The band played another two sets and then we put our own music on. The party ended at 3 am, but people weren't ready to go home that early - maybe it was the ballerinas that made sure everyone had so much energy :D We'd had such a great time having all our beloved friends with us and we were all enjoying ourselves so much that we just could end the party yet. When we were trying to figure out where to go, I asked my MoH if there were any of those small Prosecco bottles left that we had given the guests upon arrival. She said there were. So we had the PartyBox, the speaker we had bought for the ceremony and we had a box of sparkling wine. We took the boat back and headed to Kaivopuisto, or Wedding Park, like one of my friends calls it now. There we continued the night (morning) talking, dancing and singing. Finally Eerikki and I headed to our suite at St George Hotel, happy after such a wonderful night and day.