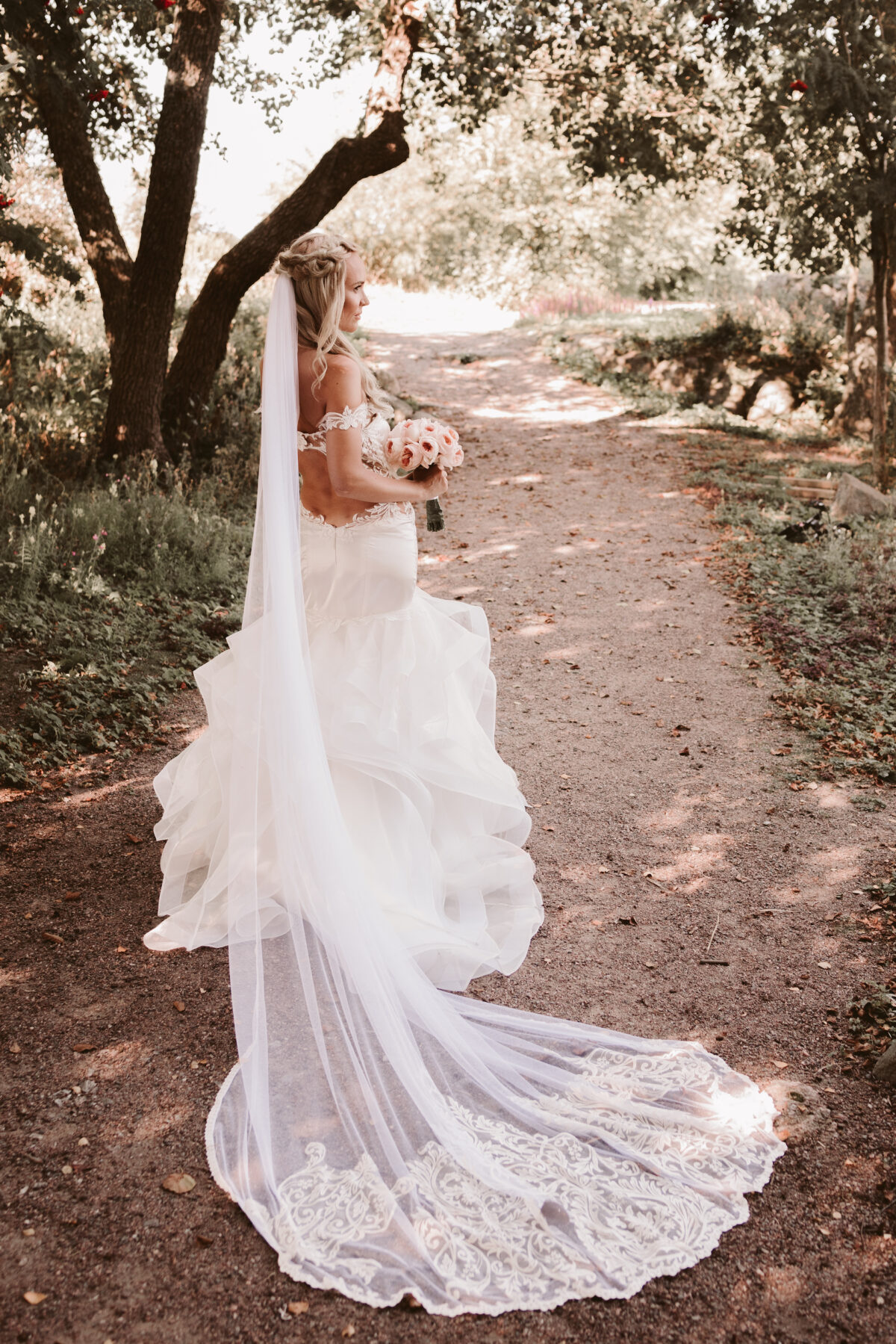 Well, let me start by telling you that this was a good source of stress for everyone involved - and a bunch of other people too :D As you may have read from my earlier postthe first time I tried my dress on, was on the night before the wedding.

I designed my own dress as I couldn't find one I liked from the stores . What I wanted was this, and I couldn't find anything even close to it: trumpet style, simple from the front, made of silk, open back with lace on the sides and on the back piece. Big wavy skirt with a train and off-the-shoulder sleeves. I wanted to keep the front part simple as I prefer lace in small amounts and also for me having an eye catching back, skirt and front would be too much :D.

You can read about the dress making process parts 1 and 2 clicking those links so I wont go over the whole process here. Where we were at this point was that it was the end of spring, my mom had the patterns for the top part of the dress and she felt confident that she knew how to make the dress. Once our wedding got postponed in the spring we took a break from the dress as it seemed very unlikely at that point that we'd have a wedding this summer and I wanted a small break from all the wedding stuff.

Once we got back to the dress in the summer all went well until we got to the skirt. My mom was under the impression that it was some kind of a simple tulle skirt. Once she started describing how she was going to make it, it became clear that she had a wrong idea of what the dress was supposed to be like. At this point, we had a month until the wedding. My mom had never made a skirt like the one I wanted and she quickly realized she wouldn't have time to figure it out so we decided to get some help. She had a lot of sewing on her hands already, poor lady, as she was also making me a veil and a jacket and and a rehearsal dinner dress.

Three weeks before the wedding my mom had agreed with a sewer that she'd make my skirt so it appeared that a catastrophe was averted.
A week later, however, she contacted us and said she wouldn't have time to make the skirt after all... So we had wasted a week, the wedding would be in two weeks, I had only half of my dress done with no idea who would make the other half. We had our crafts day with our wedding team and when I heard about this our bestmen were at our place and they did their best to console me and help out, and particularly big thanks goes to Mikko who did all he could to find me a new sewer. You can imagine that it wasn't a great day for me so it was good we had friends over that day. It wasn't easy to find a sewer as the skirt was very difficult to make and someone who hasn't made anything like it wouldn't be able to make it in a month, never mind two weeks, even if they were very experienced otherwise.

Finally my mom found a sewer called Anna Perez. She was someone my uncle's wife knew and she had made dresses for the President's Castle so she had plenty of experience from all kinds of dresses. She knew how to make the skirt and was willing to take the job though there was so little time left. I can't thank her enough <3 She was also a really nice person!

So, next Monday we headed off to her studio to go over in detail what it was that I was looking for. I was so incredibly relieved once the meeting was over. Until then I had been worried that something would go wrong , maybe she would say she didn't have the time after all, but instead she just said ok, I'll get to work :)

In the end, there was something like 15-20 yards of organza, two layers of silk and a few layers of tulle on the skirt... and it was perfect! Also points to mom for choosing all the lace decorations on the part where the skirt and top meet as I had no time left to help out at that point and she really used her aesthetic vision in other places too like on the sleeves which I just loved. I'm also quite proud on our innovation to make the sleeves removable and adjustable so I could put them up for the wedding dance.

There's a train on the skirt, its up in some of the pictures and down in others. It can be lifted up and attached to the side so that it's not in the way when dancing.

Even though we had some problems along the way, I highly recommend getting a dress made, that way you'll get exactly what you want. I do recommend though that you start the process as early on as possible and remember also to be clear in explaining what you want.
My most important advice, perhaps surprisingly, is that be stubborn. You're not going to love it if you don't defend your vision but instead get something else than what you really wanted. I suppose that's a good advice for life in general :D The things that I was told were difficult to make are those details that I love about the dress and I'm so happy I didn't give in.

In the end, all went well! I tried the dress on the night before the wedding and it was perfect, just what I wanted. I hope everyone gets to feel the same way about their wedding outfit :).