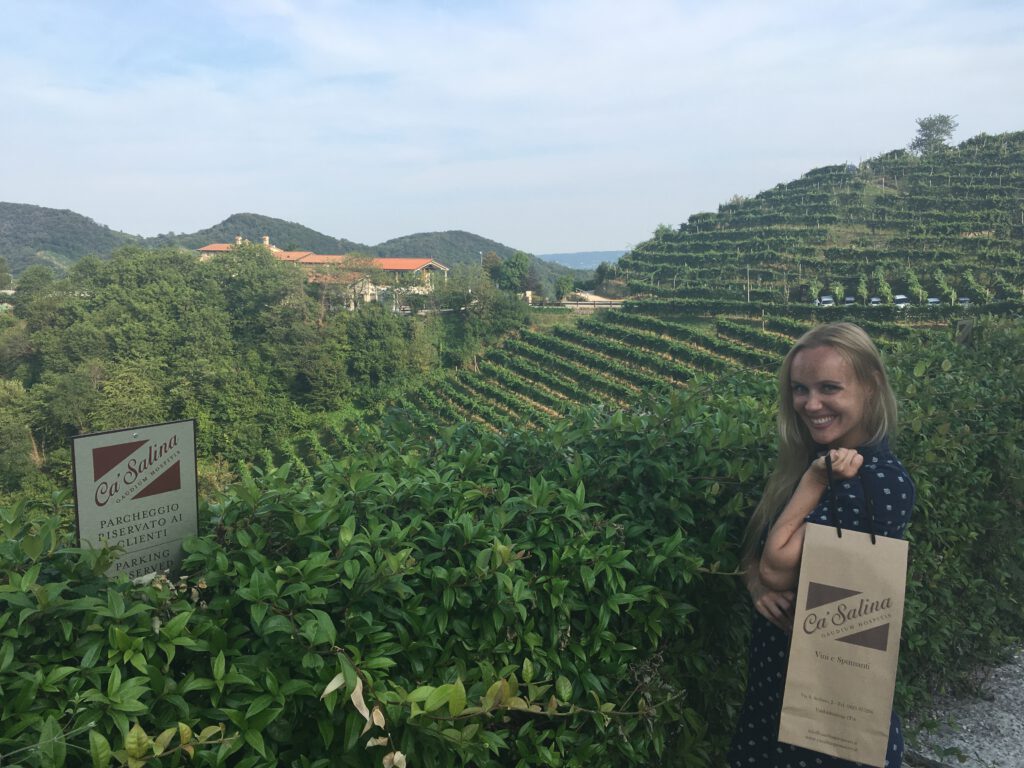 This is the second part to the previous post "Proposal Part 1.”

After we had finally gotten some food, we headed off to one of the Prosecco houses and sat down with the owner. He gave us a tasting and told us all about Prosecco and the process of making it. As Eerikki was driving, I ”had to” drink most of his as well but luckily the portions were small.

After a difficult morning we ended up having a really fun day tasting Proseccos and we headed back to our hotel. We had talked about going on a gondola ride and so around 10pm we headed downstairs and got on a gondola.

We rode down empty, dark little canals. It was all quiet and the only light was from the little lamp on the gondola. We arrived on the big canal with the large lit up buildings and there Eerikki got on his knee and proposed.

After the proposal we were both on quite endorphin high and didn’t know what to do next. I suggested we get some dinner, though neither one of us felt hungry anymore. We found a restaurant that was still open and ordered some dinner and prosecco and raised a toast on our engagement. After that we googled, what to do when you’ve gotten engaged 😀 My post on the topic can be found here.

Eerikki told me he had asked my mom at the birthday party before leaving and I thought that was a beautiful gesture. He had also called his own parents and told them about his plans before we’d left.

Once we’d had time to take it all in together I figured it was time to tell my family and close friends. That happened to be pretty much the only time ever that my mom had her cell on silent so she didn’t hear about it until the morning.

The next day we traveled back to Bologna and took a cooking class together. Once we got home we started looking for a wedding venue straight away.

The whole trip was amazing. We had talked about getting married some day in the near future, well within the next 50 years… but I took it to mean pretty soon! I never would’ve thought Eerikki would surprise me like this. Sure, the thought occurred to me in Italy that I wonder if he has plans to propose here but I wasn’t sure in any way until I noticed him starting to turn and get on his knee on the gondola.

This was the story of our engagement but I don’t think the moment of getting engaged is any less special and important if it is a spur of the moment on your home couch, for example. In fact, I’ve asked our married friends stories about how they got engaged and it’s been so fun to hear stories ranging from ring handed out with a hangover pizza to a proposal at a graduation with the whole family present. Each story has been unique and romantic in it’s own way and often just perfect for the couple in question.

My blog is a finalist in the best wedding blog of the year competition. If you like the blog, you can give it a vote here.