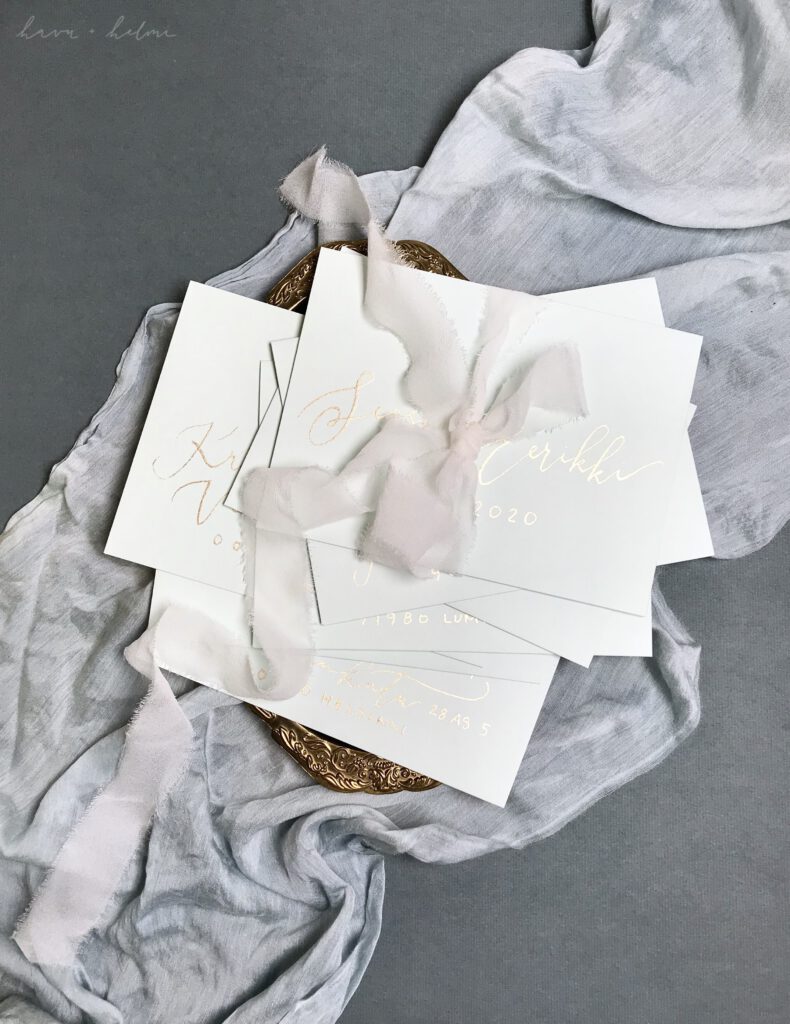 I know, sounds conceded to say that about our own wedding invitation envelopes but as I’m sure you can tell by the look of them, we didn’t make them ourselves. 😀

I was at the Klaus K Wedding Rehearsal –event in January and saw some beautiful invitations by Havu ja Helmi there. As we had already ordered our invitations I was about to walk away until I saw the calligraphy they had made on envelopes and I was sold. We were still waiting for our envelopes to arrive, so the timing was perfect. From then on I just couldn’t imagine sending our invites without such beautiful calligraphy.

Havu ja Helmi’s Milla and Sini were really friendly and helpful throughout the process and agreed to write the addresses on envelopes I had already bought (and that the post office later lost, but that’s a whole different story). We were also in a really big rush as we had set our RSVP date for 3.1. and our envelopes were still lost somewhere between Helsinki and Tampere in early February but they understood the situation and were still able to get the envelopes to us in time which I’m really grateful for.

We chose the style we liked and the color of the ink. Eerikki was worried that the people at the post office abroad wont be able to read the calligraphy but as he really liked the look of them, he trusted me when I said that there was nothing to worry about. That’s, in fact, the best thing about them – they are beautiful and readable, I wouldn’t take a chance on our invitations getting lost, either. What actually happened was that my god mom in England got her invitation on Saturday when we had sent them out on Thursday. 😀 My mom was joking that how nice that she’s invited as my mom living a mile away hadn’t received an invitation to our wedding.

If you’re looking for more beautiful things for your wedding, Havu ja Helmi has a lot of other stuff too. They can design and make all the other wedding stationery too like menus, programs, place cards, table charts and welcome signs.

We got a lot of great feedback about our envelopes, my god mom said she’s gonna frame hers. 😀 In addition, ordering so much stuff from stores online, it felt really nice to support a Finnish company. <3