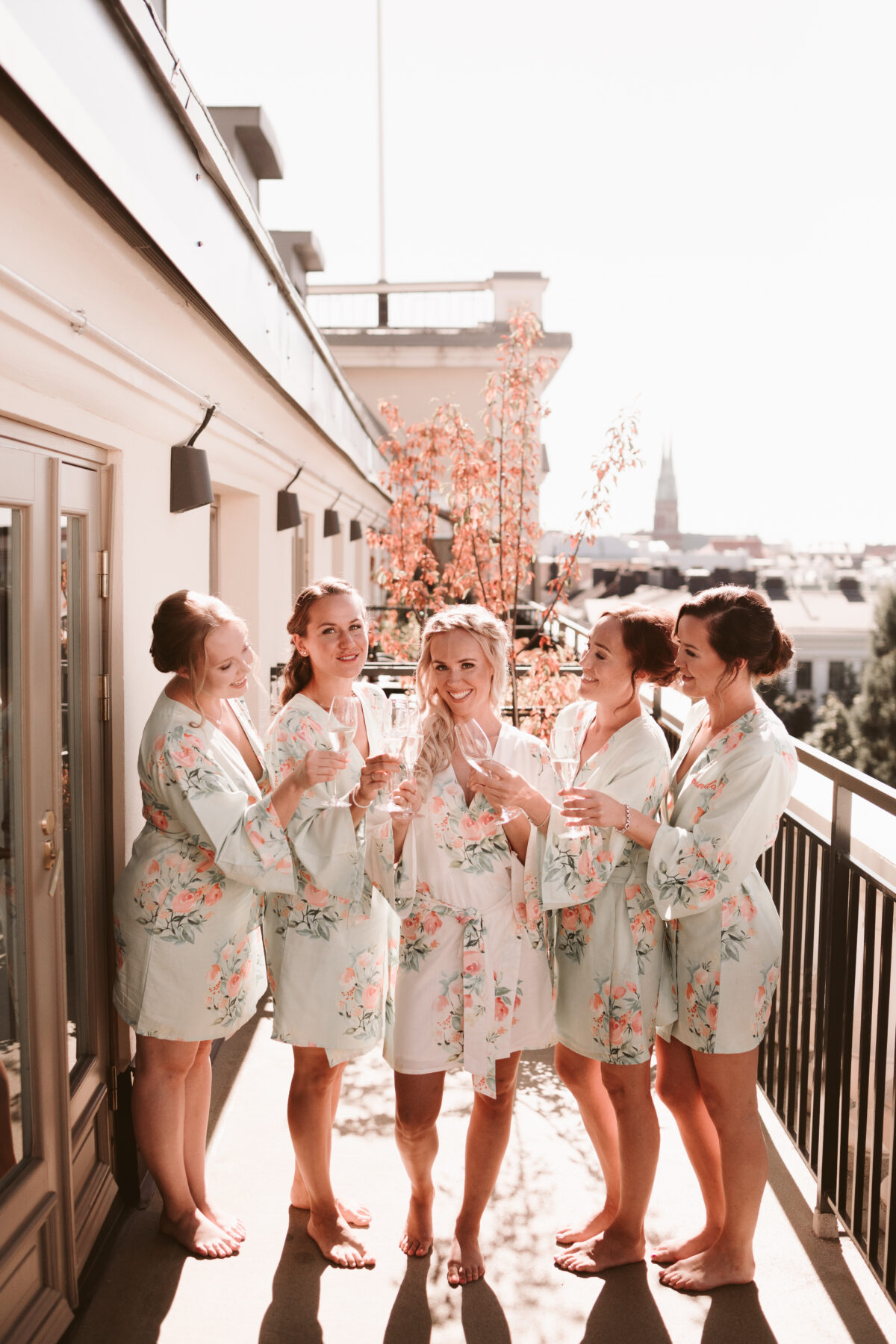 Good wedding morning to everyone!
In the previous post I wrote about the day and night before the wedding. On the wedding morning my Maids of Honor and I woke up having stayed the night at the St George hotel. I had slept a bit over five hours so that was pretty good, I had worried that I wouldn't get any sleep at all, after all. I had wanted a room with a view to the Old Church Park so we had the Atelier with Balcony room. First we went to get some breakfast and then headed back to the room. My makeup artist, my lovely niece Melissawas already waiting in the lobby and around the same time arrived the hairdressers from Villi Vanilja and our photographer/videographer.

Mareena started working on my hair and Hanne on the bridesmaids and MoH. My bridesmaids had come to the hotel in the morning and the morning was a powder and hairspray scented rush to get everyone ready on time.

They say you'll always end up being in a hurry on the morning before the wedding and we wouldn't dare breaking the tradition so in a rush we were. I have to say I've never seen a lady on a mission to get someone's makeup done like Melissa was with me that morning. She was slapping makeup on me like a machine and yet the end result was absolutely perfect.

Then we got a moment to relax, we took our Prosecco glasses and went to the balcony for some pictures.

I had gotten my bridal party mint green robes as a gift with names on the front and titles in the back. They also got peach colored hangers with their names and MoH also received golden Maid of Honor ("Kaaso") mugs.

Then it was time to put our dresses on and go. The morning had gone so fast, it was almost hard to believe that it really was go time already. :D

I love watching the Koff's brewery horsesgoing around the town and I had dreamt of having them as my wedding ride some day. Once we chose to have our wedding on an island I let go of the idea until one day I realized that I could ask them to give us a ride from the hotel to the pier. I had no idea if this is something they do but I figured you can always ask. There was a deeper meaning to this too, my late grandfather worked for Koff all his working life and my mom likes to tell stories about the company from that time. I loved that this way I could sort of have my grandfather be part of the wedding. Luckily they agreed to my idea so waiting for us outside the hotel was this lovely horse carriage ride pulled by horses Frederik and Gunnar.

The funny thing was that once they put the stairs down I realized that there's absolutely no way I can raise my leg that high up. :D I had a trumpet dress so it was well fitted all the way down under my butt and it was made of quite stiff silk so it wasn't exactly a cancan dress.

Well, worry not, my bridesmaid Panda evaluated the situation and said "no problem, I'll lift you up there". So she grabbed my under the arms and lifted me up about half a yard straight up while my MoH were already in the carriage receiving the giggling bride. It was such an un-elegant way of getting on this classy ride I wish we had some pictures of that :D

It was so much fun sitting on that carriage heading to the pier. People were waiving at us and taking pictures and I waved back. A few congratulated too, it was really amazing :)

I remember how nervous I was though. I remember thinking how I felt like a prized sheep taken for slaughter - I remember that exact thought going through my head many times I don't know why! :D There I was taken around the town all dolled up waving at people happily but soon it was to be THE moment... It wasn't the marriage part that made me nervous, I've never questioned marrying Eerikki, even though I think it would be natural to do so. I've just been so happy that this amazing person wants to marry me out of all people. But somehow that day made me a lot more nervous than I ever thought it would. I couldn't figure out exactly why, and I still can't, but I think I was mainly nervous about doing something "wrong", such as tripping on the mat, not getting through my vows due to crying or not remembering the steps to our wedding dance. I'm sure I was also nervous about everything else working out too, it was such a big day, after all. So, we got on the boat and headed off towards the island, two bridesmaids, two maids of honor and one very nervous bride...

The week of our wedding: Day 4