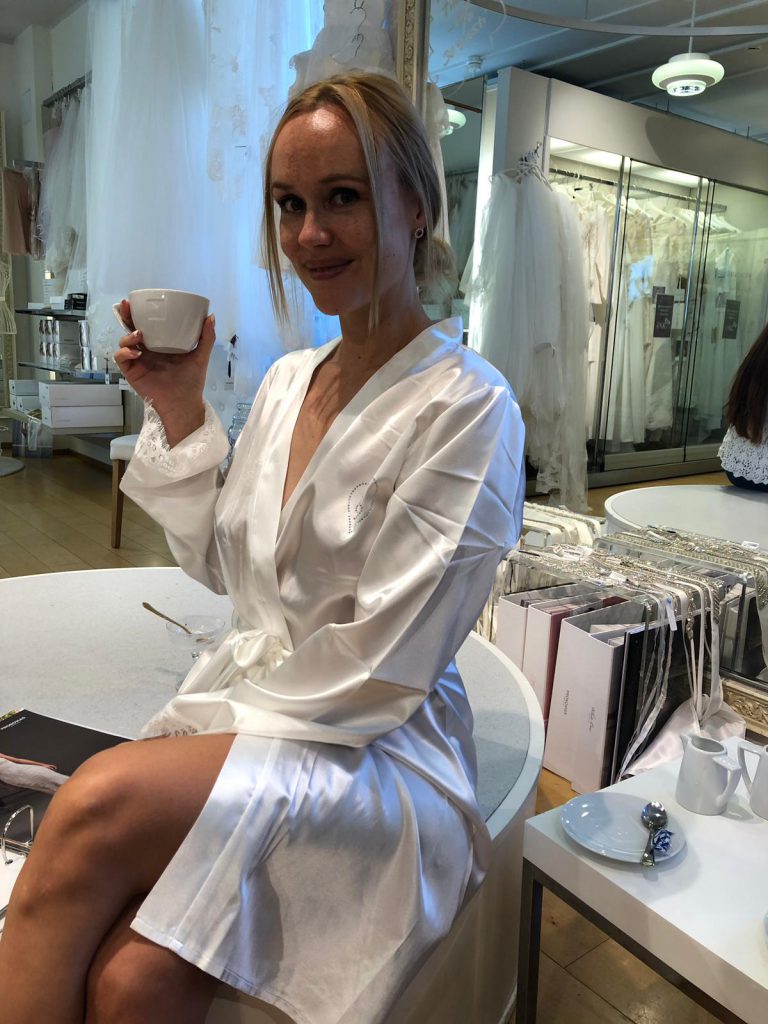 My search for a wedding dress has come to it’s end. Result: no dress. I was waiting for the ”teary eyes – this is the one” feeling, but it just didn’t happen. I found several dress that I couldwear but not one that was perfect. I have mentioned my (frustrating) habit of obsessing over details so I just couldn’t take a dress that was only good enough. I think the main problem is that I have quite a clear picture in my head of what I want so no wonder no dress is going to match exactly that.

Luckily, I have a back up plan as my mom is, among other things, a dressmaker and she has made a wedding dress before and also several ballroom dance dresses. She offered to make my dress if I don’t find one from a shop so that’s the plan!

If someone else is having trouble finding the right dress but doesn’t have anyone to make it, I’ve heard that Heidi Tuisku is good. Apparently the price isn’t too high either but that depends on the type of dress and amount of detail, of course.

As trying on wedding dresses felt like such an important moment I thought it was appropriate to celebrate it with some food and drinks during the appointment. This was a service that some of the shops offered for a small fee. At Niinatar we paid 25 euros for having some snacks during the visit. During the weekend the price would’ve been 35 euros. At the White Dress shop at Stockmann we booked an appointment with breakfast which cost 50 euros. We split the cost between us so it didn’t get expensive.

First of all I have to say that I was surprised that they didn’t serve sparkling wine anywhere! I thought it was customary when trying on wedding dresses. I don’t know if it’s something you’re supposed to ask for separately but I don’t generally feel comfortable asking for booze while shopping.

That being said, I have to mention that I was once at Tiffany’s and the sales person asked if I wanted to have something to drink. Thinking he meant like coffee or water, I thought I was being funny as I replied ”sure, I’d love some vodka”. He said ”okay” and as I couldn’t back out anymore, there I was sipping vodka cranberry while looking at earrings.

But back to wedding dresses!

The sales person at Niinatar was very sweet and the snacks were soda, coffee, tea and macarons. I was kind of expecting something a bit more than that but then again, they weren’t that expensive either. Maybe it was just the sparkling wine that I was missing!

At the White Dress shop we got croissants, berries, chocolate, muesli, yoghurt and juice and once we asked, we also got some coffee. I thought that was good for breakfast. I also received a gift as part of the package, which was nice! The gift was chocolate and a garter. I would definitely recommend the White Dress breakfast.

In addition, I’ve tried on dresses at Kaunis Morsian , ZazabellaOutlet in Espoo and Zazabella in Helsinki and VienoThe Kaunis Morsian shop is quite small and once the next bride came in, I left as there was only one dressing room. In Zazabella Helsinki the service was really friendly even though we hadn’t booked an appointment. They also had a lot of beautiful dresses. Vieno had good service but just didn’t have what I was looking for.

Please tell me about your experiences – did you have trouble finding the perfect dress? I would also love to hear from you who are getting your dress made.

Last Name – Change It or Keep It?

The RING Has Arrived – AGAIN