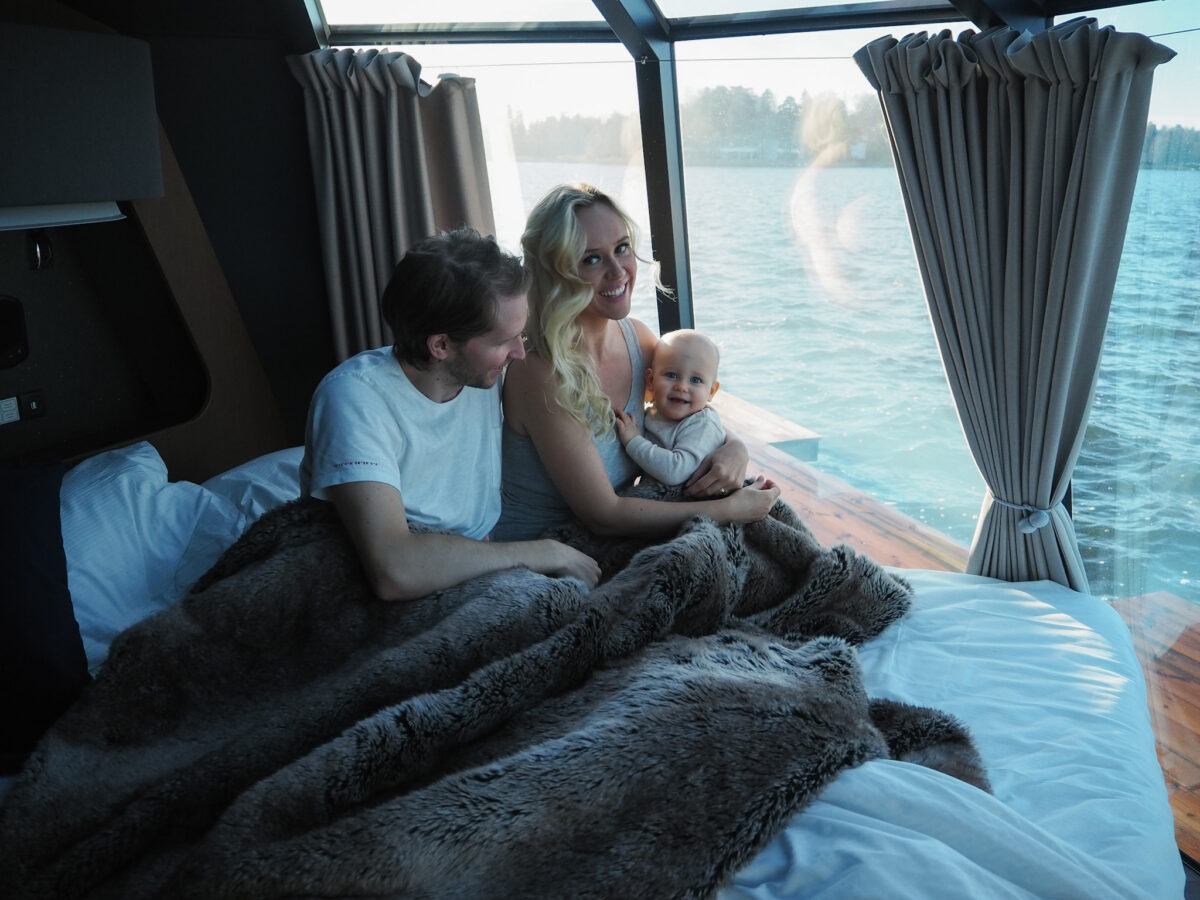 I've wanted to visit at an iglu-hotel probably ever since I first heard that there are such things. When I was offered an opportunity to go and try out one, I was immediately excited. The best day for a visit ended up being on the Father's Day weekend which worked out perfect as I would had planned something special for the weekend anyways but what's more special than a night in an iglu and a visit to the lovely Kalastajatorppa hotel. Eerikki and I have visited the hotel once before and really liked the place. It's definitely one of my favorite hotels in Helsinki and the fact that they now have igloos on the deck outside (Iglux) makes the place even more amazing, obviously.

Our baby is just under one year old and we haven't spent a night away from him yet but that wasn't a problem at all, in fact the place is actually perfect if you want to have a romantic staycation but aren't ready to leave your baby with a sitter yet. The Iglux-night includes the iglu and a Deluxe-hotel room so you can do what we did and ask someone to come with you to take care of the baby at the hotel. We asked my mom with us and it worked out perfectly, my mom took care of Jordan while we were having dinner, then I put him to sleep and then Eerikki and I headed to our iglu. Mom spent the night at the hotel room with Jordan and we were just a few minutes away, if there had been any problems. In the morning I woke up before Eerikki did and headed over to the hotel room and so Jordan didn't have to go for long without seeing us.

We arrived at the hotel on Saturday afternoon and since I had no expectations for the hotel room as we were there for the iglu, I was pleasantly surprised. The room was at ground level as that way it's as close as possible to the igloos but the view was great and the bathroom was large with a tub. I've told you that our minimum criteria for a hotel room is often that it has a tub. Jordan had fallen asleep in the car and so I took some me time and ran myself a bath. Once my mom got there, Eerikki and I headed off to dinner and then I went to put Jordan to sleep and then it was time to head to our iglu.

The iglus were decorated with good taste. The were located on the docs in front of the hotel and even though the day was unusually windy when we visited, the igloos didn't rock very much. The view was obviously gorgeous and while it's very unlikely to see northern lights in Helsinki, to me the sea view was definitely enough and if I were ever to visit during a big storm... I would just love that. If storms are not your thing, then maybe a light night rain then :D. There are stairs to the sea at the dock so you can go swimming in the sea almost straight from the front door of your iglu but I'm one of those people who prefer a hot sauna before and after a winter swim.

We had ordered our breakfast in the room, so once I got up, I headed over to the hotel room. If you order an in-room breakfast, it'll be delivered to the hotel room, not the iglu. My mom had already eaten and so I had some food and started playing with Jordan. Once Eerikki woke up, Jordan and I gave him his gift and card and then my mom left to go home. As we had a late check-out, we stayed at the hotel celebrating Father's Day there. We took a quick swim at the hotel's heated indoor pool but as the saunas aren't open during daytime, I didn't get to swim in the sea this time.

Like I mentioned in the beginning, Hilton Kalastajatorppa is one of my absolute favorites among hotels in Helsinki and this experience lifted it even higher. The igloos are a cool exotic addition to the gorgeous sea view and I can't think of a more romantic staycation than a night under the stars at an iglu.

Getting Married at the Crowne Plaza Hotel