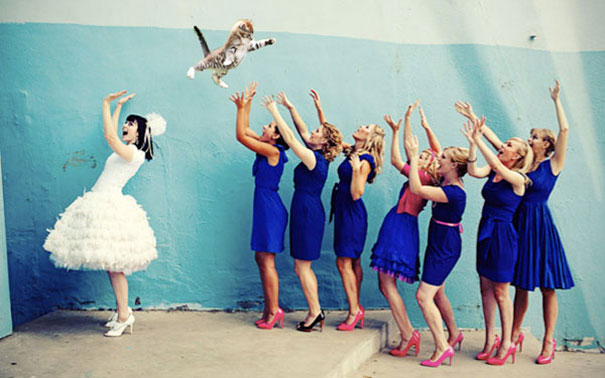 For me a great wedding requires two things: the wedding reflects the couple and family and guests have been considered and also enjoy the event.

I don’t think there are traditions nowadays that have to be included in a wedding. A couple should feel comfortable to pick the traditions they want or abandon them altogether. For us it was important to consider also what our families and other guests would enjoy but one can also plan the day to suit only their own wishes. Nowadays one doesn’t feel the same pressure to get married as some decades ago and marriage is more of a choice. If a couple does decide to get married they don’t necessarily do it in a church anymore but might get their wedding officiated by a priest or a civilian at their wedding venue or out in nature, for example. The couple may represent any genders, and many have kids already when getting married, either together or from previous relationships.

One might start questioning if old traditions serve any purpose anymore? For me, I see wedding traditions in a similar way than Christmas traditions. Christmas was originally a pagan holiday and was later combined with the christian Christmas. The modern Christmas is a mixture of pagan and religious traditions. This combination of pagan and religious traditions that are important to me make my Christmas. Some are important even though their symbolism doesn’t represent my beliefs, some have changed a lot through decades (like Santa Claus!) and some I don’t even know what they used to represent. This is similar to my view on wedding traditions.

At our wedding we have gone traditional with my wedding dress which is white, even though nowadays very few are a virgin on their wedding day. On the other hand, go further back in history and wedding dresses in Finland were black. We also want a first dance and a wedding cake. Back in the day the wedding cake was believed to keep evil spirits away. I’d be willing to take my chances with the evil spirits but I think wedding cakes are beautiful. We keep our engagement rings on our lefthand ring fingers even though I’m not usually big on wearing jewellery. In the past when there wasn’t any official paperwork, a ring was the only proof of marriage. They also used to believe that your left ring finger has a blood vein that leads straight to your heart. It’s been known for long that veins between fingers are similar to each other and heart has nothing to do with love.

Some traditions we have taken and made more modern and our style. For example, I offered to get my fiance as nice a ring as he likes, but he wanted a simple white gold one so that’s what he got. Tomorrow gift was a tradition where a husband would give a gift (like a cow) to their wife the day after the wedding to make sure she’s financially taken care of if he dies. We are both getting each other a gift, I doubt neither of them will be cows. In Finland the bride usually has a maid of honor, sometimes a few, I have two and also four bridesmaids. They are all women by chance. I want to have a bachelorette party and my maid of honor has been instructed to invite my male and female friends both. My mom will walk me down the isle. Back in the day the father of the bride walked the bride as the bride moved from his fathers care to his husbands care. The symbolism is quite creepy but I doubt many people think of it like that anymore.

Wedding traditions we are leaving out include throwing rice on the newlyweds. Depending on the source, it’s an old fertility tradition or tradition wishing the couple prosperity. Bachelorette traditions such as humiliating the bride, making her sell stuff or the bridal sauna I don’t want. We wont be married in a church but will have a civilian ceremony at the wedding venue. We won’t have a wedding car as we are getting married on an island. While I usually find following the dress code very important I think that the groom should wear exactly what he wants. When it’s your party I think you can break the dress code and I want him to have an outfit he likes and feels good in. We’ll also have some other things at the wedding that aren’t so traditional but you’ll hear more about them after the wedding.

For us some of the wedding traditions make the wedding feel like a wedding, some we have modified to suit us and some we have left out completely. However, leaving out all traditions and doing something completely different can work out great too. Though, in reference to the first picture on this post, as a friend of animals I kindly ask you to leave cats out of your craziest plans. 😀

Below are some less known traditions you might not have even heard of, found from Yle.

Whoever is closer to the priest has the last say in the marriage. The wedding couple shouldn’t stand far from each other or they’ll stay distant forever. You may not look backwards at the ceremony. When leaving the ceremony, the couple shouldn’t turn their backs to each other or their feelings towards each other will grow cold.
The groom should keep his shoelaces untied so that the marriage would be honest. A sign of the bride’s innocence is wearing her hair down. If the hair is on a bun, a baby is on it’s way. The groom stands on the righthand side as back in the day men had a knife on the right side and this prevented the knife getting stuck in the bride’s clothes. An unmarried guest can put a wedding candy under his/her pillow to improve his/her chances to get married.

So shoelaces open for an open, honest marriage and make sure to have some wedding candies for those wanting to get hitched! In other words, don’t stress too much about traditions, you probably don’t even know about them all!

Please share what traditions will be at your wedding and what you are leaving out.

Dreaming of a Seaview Wedding