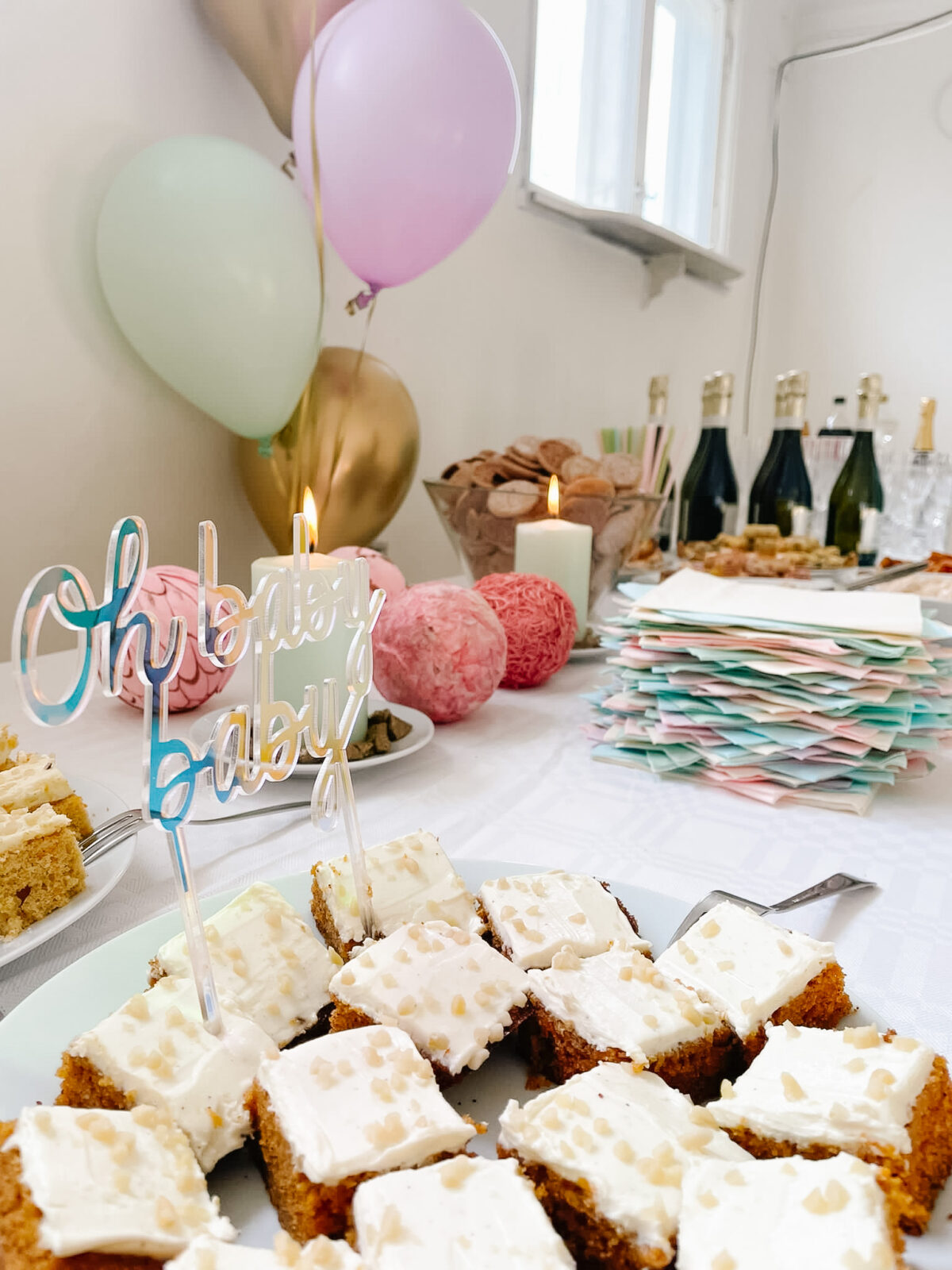 We had such a lovely baby shower last weekend and I've been looking forward to telling you what kind of a party we had!

First of all, our baby shower was for both of us, Eerikki and I. It would've felt weird having it just for me as we're both having a baby, after all. I'm not a fan of separate events for women and men anyways and we invited friends regardless of gender, obviously. It was also important for me that there would be wine served at the party, even though I'm not drinking while pregnant.

Second of all, as I love to plan stuff, I wanted to take part in the planning of the baby shower, so it wasn't a surprise. We agreed on the date and program together, I chose the decorations and Eerikki and I made the guest list. I found the most adorable baby shower decorations from Calligraphenlike the "Sissi's About to Pop" popcorn cones!

We also made a gift registry and I highly recommend doing that! Our guests really liked having a list to choose the present from and for us it was really handy as we only got things that we actually needed and wanted.

We had planned two games for the party but in the end we only did one of them. The one we did went like this. We brought some baby gear from home, stuff that you couldn't easily tell what it is by looking at it. The guests were asked to write down what they were, and if, and when, they didn't know, to come up with an explanation that would be the most believable. The things we brought were a part from a baby bottle for mixing the formula, a mysterious looking part from a breast pump (I still have no idea what it's for), a bag for baby wipes, a part from a Nanny SIDS alarm and a hose from Babyvac.
After everyone had written down their explanations for each item I read them aloud and everyone could vote on the most believable explanation. It didn't matter if the item really was for that purpose, the number of votes the explanation got was the only thing that mattered. The person who's explanations got the most votes won and the prize was a pack of condoms.

The second game would've been a music quiz, but we decided to skip it and use the time for socializing with the guests instead. The idea was this, however: I had chosen songs suitable for the baby shower theme such as songs that repeated the word "baby" a lot. The idea was to play a short sample of each song and the guests were to guess what song it was and who was the performer.

We also had some Baby Quiz forms where each guest could guess the name, height, weight and day of birth of the baby and I read out all the baby name suggestions.

It was amazing that so many people were able to make it! There were more than 50 of us and I just loved seeing all our friends, it made me realize how much I had missed big events and how rarely there were any nowadays.

At the end of the party we had a diaper throw too where the person to catch it was the one to get a baby next. Eerikki threw the diaper and it was caught by my little sister's boyfriend. Maybe there's another cousin coming for Bebe sooner rather than later... :D

What to pack in a hospital bag?