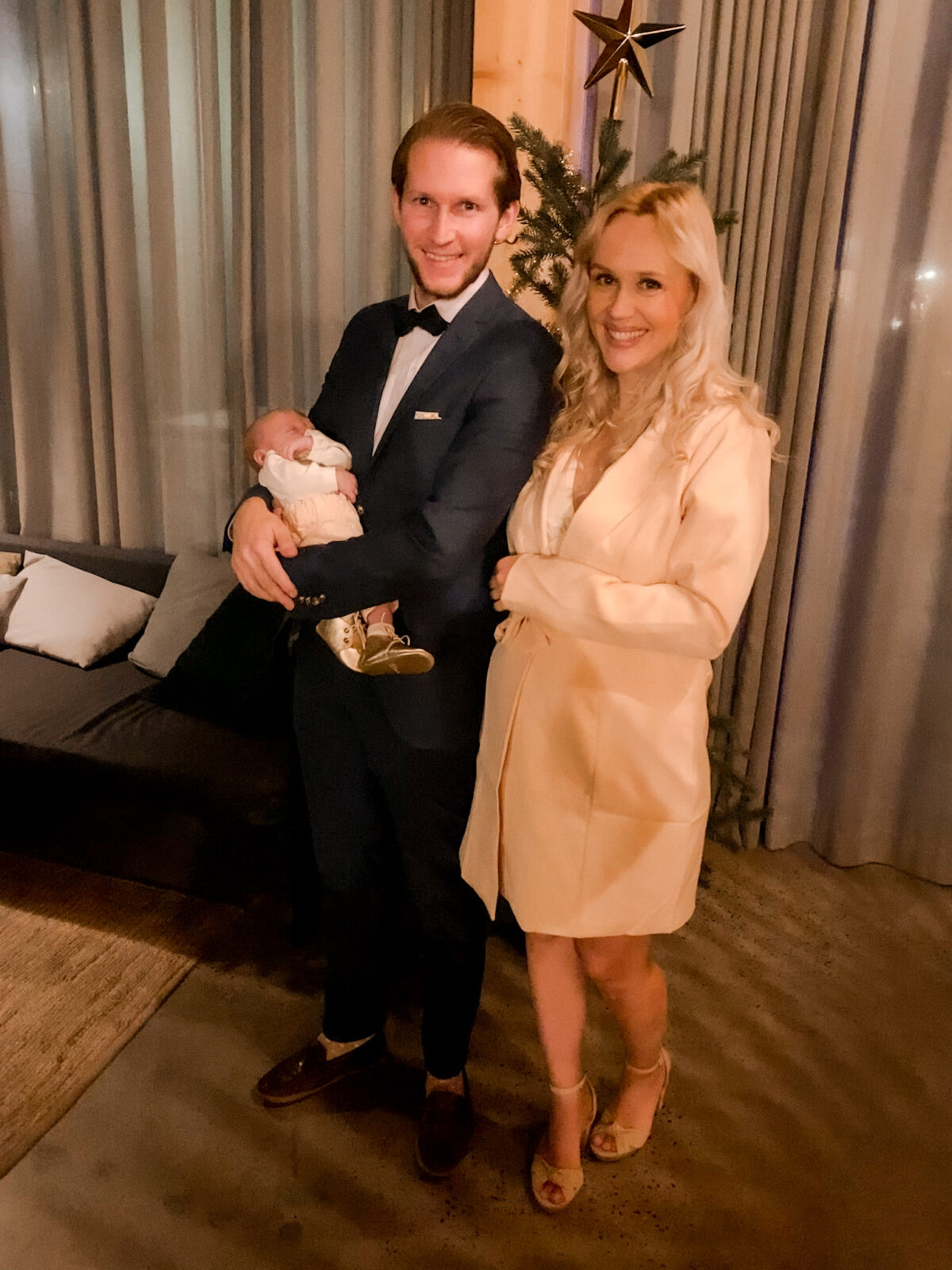 I'm so excited to finally get to tell you about our baby's Name Giving Party. Ok, I don't know if there's a better word for it in English, basically it's like a Christening but not a religious one. Our name party took place on the last Sunday before Christmas. We had chosen the venue and the date months before the baby was born but as he was almost two weeks overdue, we ended up being in a huge rush to get everything ready in time. Luckily, we were able to have the party as planned with a "covid appropriate" 20 people group and so our little one got his name: Jordan Benjamin.

The venue is called Talviterassi (Winter Terrace) and it's at Allas Sea Pool. Allas is one of my favorite places in Helsinki and when we first started thinking about where to have the event, I immediately thought them and I think the Winter Terrace was an amazing find! It has a beautiful view to the sea and to the city and when it got dark outside, the place looked so pretty in candlelight. I like the beautiful and neutral style of the place and it's easy to decorate but needs no decorations at all, if that's what you prefer. Our theme colors were gold, white and peach and so we took somethings in those colors to the venue such as candles and napkins. I had mentioned the staff that these are our theme colors and they had gotten cute little peach flowers for us. With these little details the venue looked personalized for our event while not overwhelming the place's own look.

I had serious trouble finding Jordan something to wear! I felt like all baby boys' clothing was dark, or then it was made of linen and I feel like linen is too summery. Finally I was able to put an outfit together from pieces from different stores. I got the gold leather shoes from Etsy, the pants from H&M, body from Kamppi shopping mall and the golden bowtie was made by my mom.

I had ordered some hand sanitizers to give our guests as gifts but due to the rushed schedule they arrived after the party. Luckily that's not so serious, we've been giving them out after the party.

Here's what the program was like. First my little sister's boyfriend Tommi played guitar and sang a song and then we got to the actual ceremony. Jordan's godfather welcomed everyone and said a few words and then each of his godparents read or sang something for him. After that his godfather told his name and we raised a glass for him and wished him welcome. Then Tommi played a few more songs and then the ceremony was over. After that we had some prosecco, food and socialized with our guests. The songs that Tommi played were "Over the rainbow", "I wanna hold your hand" and Can't help falling in love".

The food was provided by Allas Sea Pool and it was excellent! There were a few different salads and sandwiches and they had kindly considered my pescatarian diet. We also had prosecco, coffee and tea and we brought a cake and candy buffet with us.

I can honestly say this is the most beautiful location for a winter party I've seen so far. When the sun set, the place was extra pretty with the city lights outside and candles in the inside. This became one of our favorite venues and we'll definitely be having an event here again.