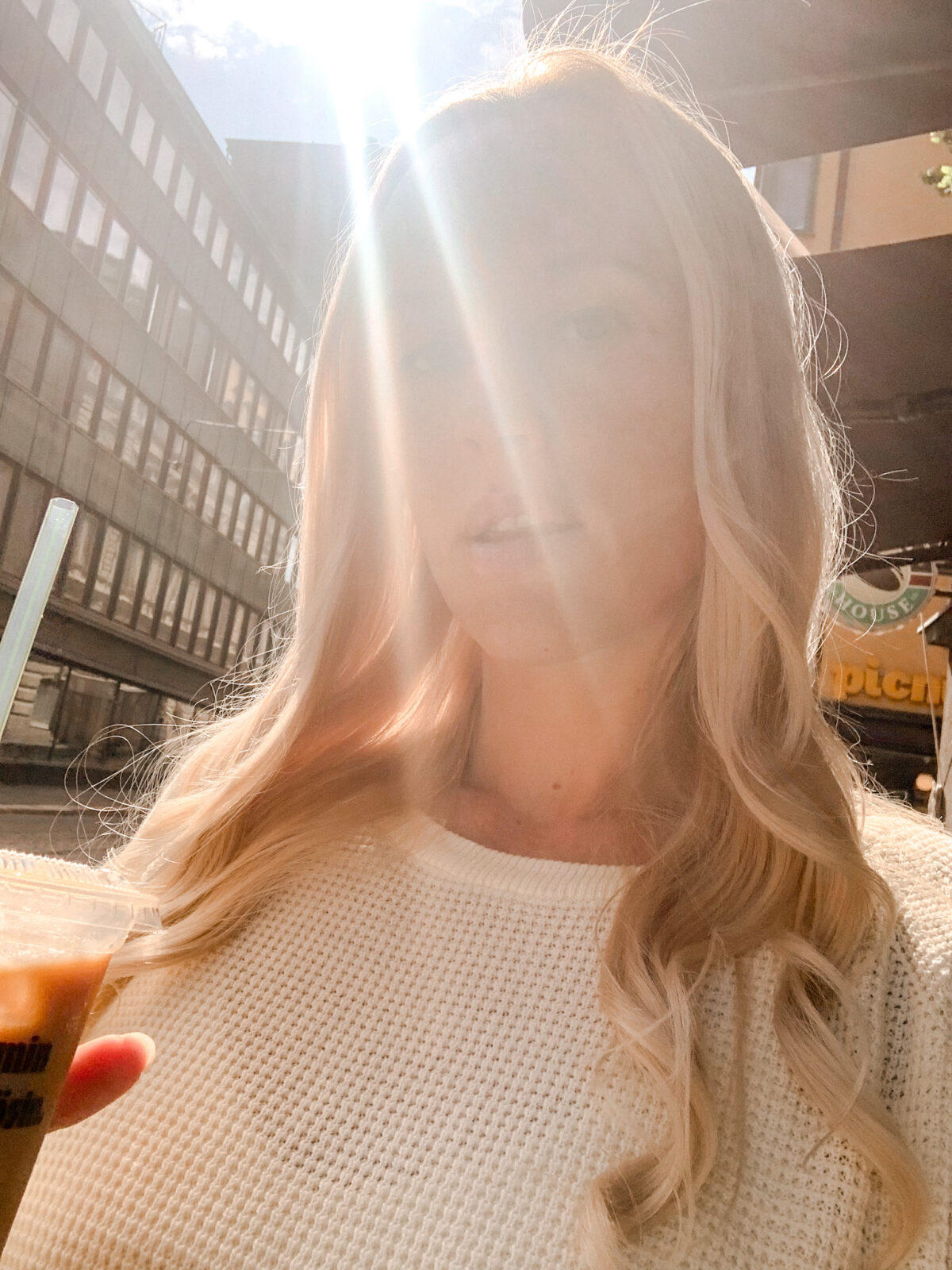 I decided I'd take some pictures so that I could do a "Day with Me" post but when I made that decision I had no idea how the day would turn out...

I woke up really early for some unknown reason. Now that I'm pregnant it's not uncommon for me to wake up early to a strange dream, for example. I had also gone to bed late the previous night, which is quite rare nowadays, so I was really tired when I woke up and spent the morning hours trying to fall back asleep either on the couch or in bed. I did get a lot of good ideas lying in bed for a motivation letter that I wanted to finish that day but I'll tell you more about that in a bit!

I got to Cafe Picnic just in time for breakfast that ends at 10 am and sat outside to eat even though it was a bit chilly. I just love that it's summer so I much rather sit outside whenever I can. I'm not a big fan of coffee and even less when pregnant but now an iced latte tasted amazing. I took my coffee to go so I wouldn't be late and headed towards Stockmann.

I was walking past St George Hotel and all of a sudden I got really nostalgic about our wedding! It just all came back to me, the feeling I had that day and I got almost emotinal of all the amazing wedding day memories. Maybe it was the combination of having been at Cafe Picnic, I place where I went a lot just before the wedding and then passing our wedding night hotel. I think we have to do like a wedding memory day someday where we have dinner at our wedding venue and spend the night at St George.

I have a collaboration with Thann Spa at Stockmann so the next few hours I spent being spoiled there. I'll tell you more about that soon! The day ended up being so exhausting though that I think I'll need a new spa day right after this one :D

I went home just for a quick visit and then headed off to Fasaani an antique/second hand shop on Korkeavuorenkatu. I was looking for a dresser for the nursery but didn't find one. I picked up a package as my online shoppings had arrived and then headed back home.

I quickly ate a leftover vegetarian bowl from yesterday and then started the day's main event, finishing the application for the ESA's astronaut call. At this point I remembered the call closing later that same night and I soon realized that the motivation letter that I had been sketching for a few days wasn't a quick one to finish...

I had ordered some flower dresses for Juhannus (midsummer) so I decided to take a little break and try them on. I have few more on the way but I already found at least one that I like, the one with the blue flowers. They were all from the normal collection, not maternity, so I had ordered them in larger than my regular size and I was happy to see them fit so well with my preggo tummy.

From here on all I had time for was to work on my application. At some point Eerikki ordered some food and I took a short break to eat something and every once in a while I tried to watch a little soccer. Around 10pm a few of our friends came over for a bit which was nice as I was almost done and had been quite tired and a bit stressed out about the application. At some point we had found a confirmation that the application wasn't due until Friday-Saturday night but I had decided to get everything ready on Thursday so that I can sleep on it and then make the final modifications on Friday with a well-rested mind before sending the application.

I watched soccer for a bit before going to bed.. well at least my eyes were pointing in the direction where soccer was playing :D. I don't usually follow soccer but I tend to watch the World Cup and the European Championships and this year it was more interesting than ever as Finland was playing there too. Soon I was fast asleep...

And so that's it, it's out there! I've applied to become an astronaut. I'll let you know if such an amazing thing would happen that I would get to the second round, maybe I'll make a post about the application process too. But now it's time to finish the application! Have a lovely, and hopefully sunny, weekend <3

How We've Taken Being Pregnant