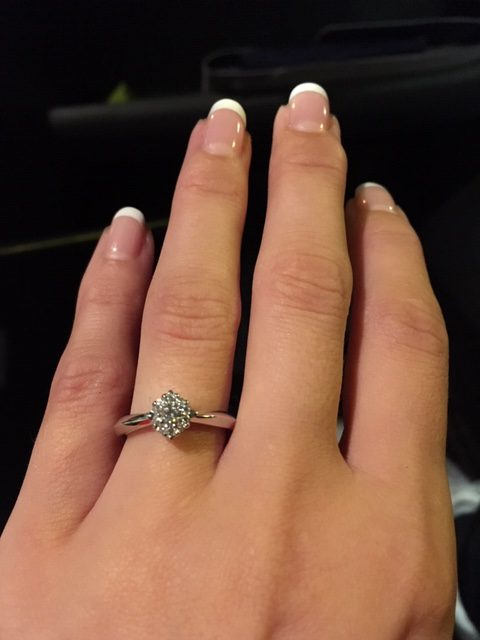 As you may have guessed from the title, the ring has indeed arrived!

As some of you might remember, Eerikki proposed to me in Venice in July but couldn’t get the engagement ring on time so he bought a temporary ring to have something to propose with. He said he’d surprise me with the real ring and I told him I don’t want to hear anything about the ring beforehand. Some months ago Eerikki had asked what kind of a ring I would like and I’d told him I really like this Olli Johan Lindroosin Kide – ring. It actually won the most beautiful ring award in 2016. After the proposal Eerikki said that those weren’t available anymore so I had no idea what kind of a ring I was going to get.

Olli Johan Lindroos We had our engagement party already booked for the next day and I was starting to wonder if I’ll get the ring in time for the party but Eerikki found a great situtation to give the ring, right at the last moment…

Here’s the story. We were at the Korkeasaari zoo at a theme night for couples – Viettelysten ilta. We saw a burlesque show and went to see the adorable Berber monkey baby and did all kinds of other stuff. I highly recommend the event for couples, it was very romantic.

When we were waiting for the show to start at the Magical Forest it started pouring down. I absolutely love rain so at least for me, that made it even more romantic. At the end of the night there was a fire show and we started thinking about heading home. Eerikki however started saying lets go there and lets go there, looking for the most romantic spot. Finally we went on top of a small hill and he took out the ring box and asked if I still wanted to spend the rest of my life with him. I said yes!, of course and got my beautiful diamond ring!

I got to admit that it was so dark that I couldn’t really see the ring properly so all I could say was that it look beautiful but I can’t really see.. Then Eerikki said, don’t you see what it is? And then said it’s Kide, the ring I wanted. So he had totally been messing with me, saying that those weren’t sold anymore 😀

In celebration of the ring, and because we were hungry, we decided to get some dinner. So we ended the night with an elegant Pizza and Prosecco- diamond ring dinner at a restaurant called Jackie.

When in doubt, pinkie out.. When at a diamond ring Pizza dinner, there is no doubt 😛