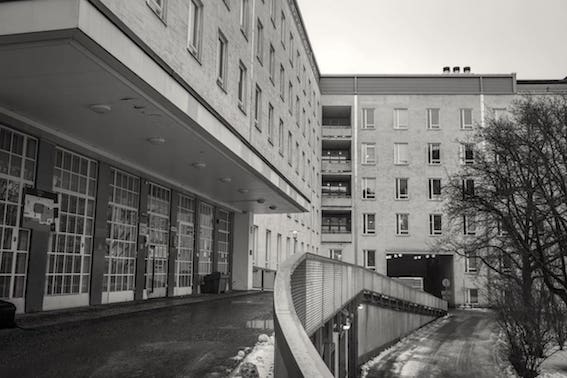 The first part of the Birth Story can be found here.

Eerikki and I both started immediately asking about epidural but the midwife said that she doesn't know if there'd be time for that anymore. I was seated in a wheelchair and we were taken to the delivery room.

While wheeling me off to the room to the delivery room the midwife was all excited saying things like "wau I can't believe you dilated at such a speed and with no pain medication! I knew you'd be great at this" and "this is what you wanted, now the baby's coming!" when I was worried that I there wouldn't be time to get an epidural. I want to believe she was just trying to be positive but I felt that she wasn't and hadn't been listening to me at all and I felt like she wasn't respecting my feelings either. I have to admit that thinking about her still gets me annoyed. I got the feeling that this had been the kind of a birth that she liked, fast and without painkillers but it wasn't at all what I had hoped and asked for. After she had gone ignoring my wishes and our requests did she expect me to now be grateful to her too because she thought this had been some great achievement? I think that it's great that there are many different ways to give birth, to each their own, but for me giving birth without pain medicine makes as much sense as going to a knee surgery and asking them to do it with no painkillers. As science has developed a solution for a problem -pain- I will definitely want to feel as little of it as possible. I rather get my feel of accomplishment elsewhere not from enduring pain when I don't have to.

I've thought about it a lot and I think that the reason for what happened is that I was given too much of the birth inducing medicine. That's why I dilated so fast and the contractions were so painful and didn't have any breaks between them. I know that medicine induced contractions are more intense than those coming naturally but they should come at certain intervals too, with some breaks between them like natural ones. Since I dilated so fast, the whole labor went super fast and was really painful which is why the midwife didn't understand what part of labor I was in and therefore couldn't administer the right pain medicine for that part of labor. This is all just guesswork though.

Like I mentioned earlier, the pushing part was the one I was most nervous about. The midwife told the staff in the delivery room how I had dilated at such a fast pace and with no pain medication and I told the doctor that due to that, I was pretty exhausted. The thought that after all that I had to start pushing, the part that I had been most nervous about, and with no pain medication felt pretty scary. Usually it takes a long time to give birth when it's your firstborn and even those who I've heard about getting to the hospital at the very last minute had still been able to get an epidural. I had been at the hospital for the whole birth, had to go through it with virtually no medication and now would have to push the baby out too without an epidural.

At this point, there were no options, so I figured after all that, what's 20 minutes more, let's just get this baby out. I had asked for a pudendal block and got it but it did nothing. So I started pushing but I felt like nothing was happening. I started wondering if maybe I'm not pushing that hard because I'm scared of what'll feel like if things start ripping apart and I have no medication to prevent me from feeling all that. The doctor wanted to try pulling the baby out with a suction cup and she put an oxytocin drip to strengthen the contractions. Nothing worked, though I should also mention that nothing that was done in the delivery room was half as painful as the dilating part. At some point Eerikki started asking for a c-section and at some point I agreed. Eventually this "20 minute, quick, a few push delivery" had taken nearly two hours and the baby still wasn't out.

To understand the state of mind I was at in the delivery room, I should tell you that I remember a female doctor and later a male doctor from the delivery room. I have no recollection of a midwife, though Eerikki says there was one as she was the one with me the whole time, I just have no memory of her. So, two hours later another doctor comes in and also wants to try the suction cup. Eerikki and I had long ago given up on any hopes of having our requests heard and so once more we tried with no result. While at it, I heard someone say something about a falling heartbeat. I'm not sure if I understood at that point that it was the baby's heartbeat, not mine.

After the second set of two tries with the suction cup failed I heard someone say "emergency c-section". I remember that my first thought was "that's done under anaesthesia. Great, I'll be unconscious soon!"