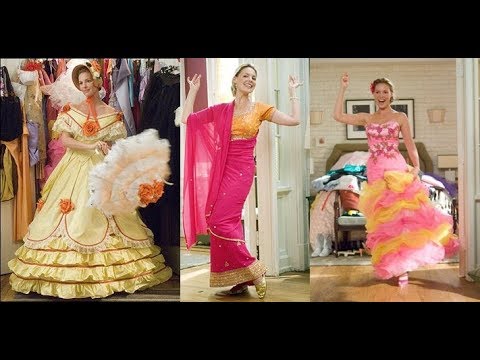 Well, I watched a lot of wedding movies to get this list done and by the time I had nine movies down that I could recommend, I was pretty much done with wedding movies for now, so in the end, TOP 9 list is what you're getting :D

A few things I learnt while putting together this list: a) there are a lot of bad wedding movies out there b) any movie can be called a "wedding movie" if there's a 30 second clip of a wedding in the end.

So while composing this list, these were the two things I concentrated on. First of all, the more the movie is about a wedding, or weddings, the better. Second of all, there has to be some other content too. If it's a comedy, it does need to be funny at times etc.

Okay, as a movie it's definitely nothing special but it's all about weddings. The theme is also a bit different than in most wedding movies so that's also a plus. The movie is about two friends getting married at the same time who start to compete about their weddings. Kate Hudson and Anne Hathaway are great.

It's a story about a woman who tries to find out which one of three guys is her dad. It's not about weddings so much but very cute as a musical and has a lot of great actors. If you don't like Abba, though, then it's not for you.

A funny movie though not so much about weddings, more about marriage as a concept and in different cultures.

I'm not big on drama but this was a pretty good one for a wedding drama/comedy. The only downside is that it doesn't show weddings or wedding planning very much. It's about Jenny who's getting married to her girlfriend but her old-fashioned parents and their friends are having a hard time with that. Spoiler alert: it has a happy ending :)

The lovely Julia Roberts and Richard Gere make the movie worth watching. Another big plus is that there's a lot of weddings on this movie. The story is not very realistic but if that doesn't bother you, it will definitely put you in a wedding mood.

Okay, I may just be a Julia Roberts fan but I had to get this on the list too. It's a classic, the only downside is that it doesn't show the wedding and the preparations so much. Cameron Diaz is also awesome in her role as the bride.

This was a great find as it's not that well known. It's funny with a lot of great actors and the wedding in the end is actually very beautiful.

A great movie overall, better than the series at times. I hadn't thought of it as a wedding movie before but it's full of wedding planning, dresses (and wedding problems for sure) so actually a wedding movie indeed!

It's become clear that Katherine Heigl is also a favorite of mine :). This movie has everything a wedding movie needs - it's funny, entertaining and full of weddings!

I wish you a wonderful weekend, perhaps filled with wedding movie nights!

10 Beautiful hotels for the wedding night