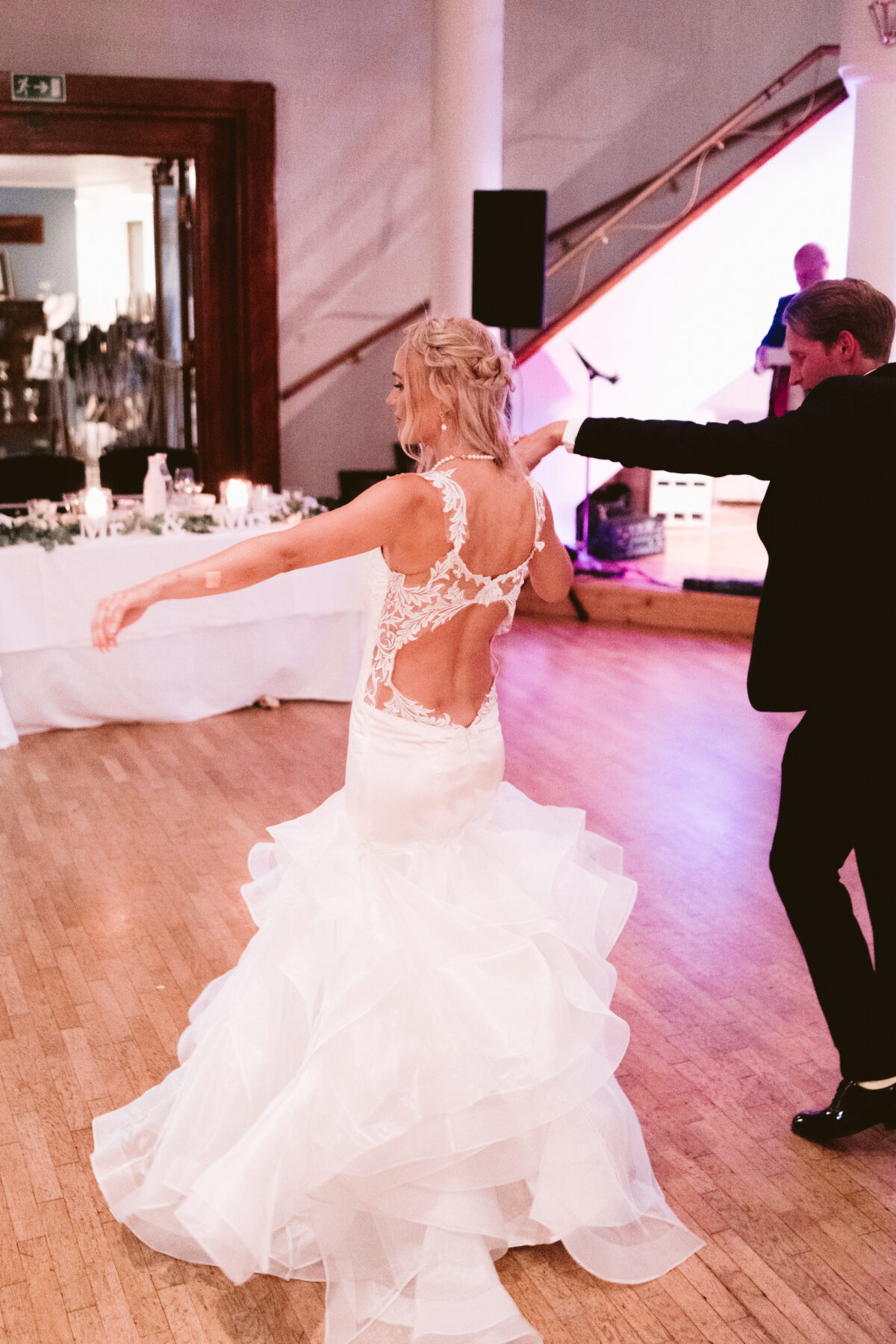 It was especially my wish to learn a choreography for our wedding dance as I love dancing and I thought it would be nice to go to classes and practice together through the summer.

We had taken a beginners course some time ago at Tanssiurheiluseura Lumetsand had a great time. We also really liked our teachers so it was clear that we would go there for our wedding dance as well. I really wanted to dance rumba as I had never tried it before and Eerikki suggested that our wedding song would be Nopsajalka's beautiful song Lupaan olla.

We took four classes and on the last class we videotaped the whole choreography, after that we just needed to practice it at home. Our choreography was beautiful but simple enough so that we could do it well even though we were complete beginners in rumba.

We ended up not having enough time to practice it together as much as we had hoped for, mainly due to the wedding getting postponed due to corona and being in a hurry when we decided to have it later on in the summer after all. I was even more worried about my dress, though. I had no idea what it would be like to dance with it. We had solved the sleeve problem with my mom but I was worried that I or Eerikki would trip on the skirt.

We tried our choreography quickly on our wedding day after the photo session just to see if it was even possible with the dress but we had never done it properly with me wearing my dress. That's obviously because Eerikki couldn't see the dress before the wedding but then again, it's not like I would've had it anyways :D I wasn't sure whether I should dance with my heels on or wearing my wedge sneakers but in the ended I decided to go with the heels, that way I was less likely to trip on the skirt as the heels were higher.

After the wedding ceremony, the dance was the part I was the most nervous about. I remember though when the moment came that our dance would be next and I realized that this was mine and Eerikki's first dance as a married couple. It wasn't a show we were doing for anyone else- well, ok it sort of was :D - but it was our first dance and that was what was important. I wanted to dance at my wedding because I love dancing and now I get to do it with my husband for the very first time so I'm going to enjoy every second of it, how it goes isn't even that important. Realizing that really calmed me down and got me excited about the dance.

In the end, the dance went surprisingly well! A big thanks to Eerikki, who had been practising on his own and I could see he knew what he was doing and all I had to do was follow his lead. Spinning with the dress was the most difficult part but I got a hang of it pretty fast. Most importantly, we really had fun! When we were practising we were staring at the walls and the floor and just thinking what we're doing next but now we were looking at each other, smiling and enjoying ourselves.

If you want to do a dance choreography at your wedding, I highly recommend Lumets. You'll get the kind of a wedding dance you want and if you are unsure, you can suggest different songs and ask which dance would go with each. We got lucky as I really wanted to do rumba and our song worked well with that.

Among other things, they also do Dancing with the Stars - courses and those would be great as a wedding gift! Something fun to do together where you need to work as a team :).

After our wedding dance, we had a surprise number, more about that next time!