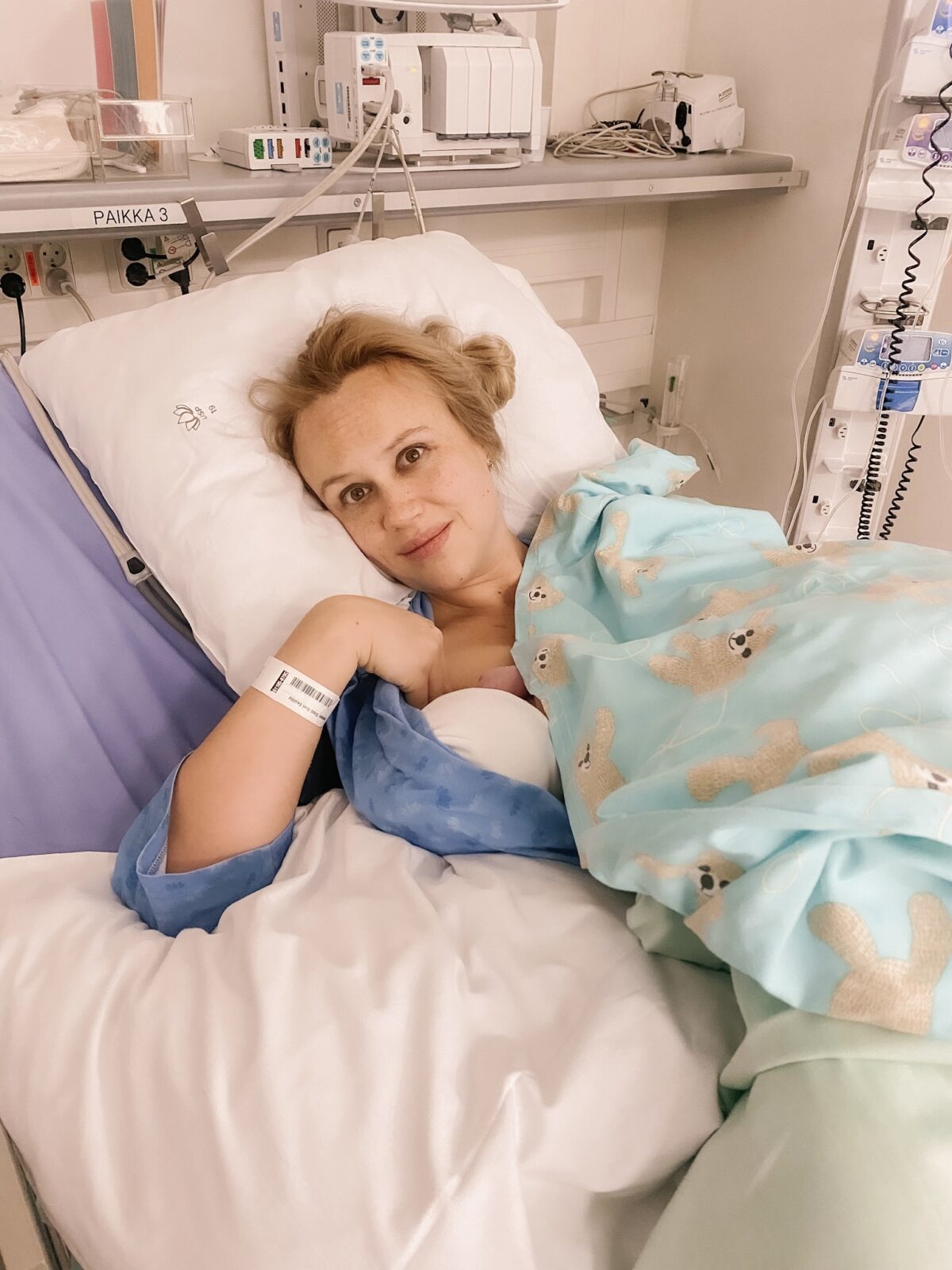 You can find parts one and two here and here.

About 1% of births end in emergency c-section. It's done if the mother or the baby's life or health is in immediate danger and they have to get the baby out in minutes. It's done with a vertical cut so that the baby can be accessed as quickly as possible and dad/support person can't attend the surgery.

Once there was a decision on an emergency c-section a lot of things started happening very fast. I remember an alarm going off and lights being switched on. All of a sudden there were a lot of people around me and I was told to move to a stretcher and then to the operating table. They asked about allergies and put an oxygen mask on my face. I got a shot of liquid to drink, then I was told to take a few deep breaths and the last thing I remember was seeing a sheet being put over me.

While I was being rushed to the operating room, Eerikki was left alone in the delivery room not really knowing what was happening. We had discussed the basics of an emergency c-section at the birthing class but I think Eerikki had already forgotten all about it. So there he was, standing alone in the bloody delivery room and so he started googling what was happening and in how big a danger were we in.

Once they made the decision on the emergency c-section the anesthesiologist was there. I don't know when he had gotten there but I was never offered an epidural during those two hours of pushing. I've also wondered that as they said I can't have an epidural as it would take half an hour to get the anesthesiologist there, what would they had done if I would've needed an emergency c-section earlier?

They got the baby out in seven minutes. They brought the baby to Eerikki and he was told that I was still in surgery and would be waking up in 2-3 hours. There Eerikki was, in the empty delivery room with a baby in his arms wondering what had just happened. He talked to the baby, who was probably just as confused, and got some food for himself at some point, but didn't know how to eat it with the baby in his arms.

I remember some moments after the surgery. I'm most amused by the memory of the anesthesiologist telling me about the surgery when I was still really out of it. I guess my mom's lifelong efforts to raise us polite has paid off as I remember smiling and thanking him profoundly even though I had pretty much no idea what he was talking about.

I remember someone asking if I wanted to meet my child and answering something very sharp like "oh, has he been born?". I got the little bundle in my arms and I remember that the first thing I said was that "he's just perfect!", I couldn't believe we had created something that amazing.

We started heading off to the family room and the baby started crying. I didn't really have milk yet and I was unable to move but I remembered a playlist I had made and played him while he was still in my tummy. So I comforted him and put the playlist on and he immediately calmed down. Eerikki said later on that it was like something from a movie, after all that we had been through, there we were all together at last, me in bed with the baby in my arms, Eerikki walking next to us and the hallways echoing from the sounds of Ashley Hepburn's Moon River and Dixie Chicks' Lullaby.

After the surgery it was really difficult to move around and I started shivering if I was up and I got dizzy easily. I remember lying on the bed in our hospital room nursing the baby and at the same time Eerikki was feeding me soup with a spoon. Once Eerikki had to ask a midwife to come and help when I almost fainted in the bathroom and Eerikki was holding the baby and couldn't help.

When we got home my family was there to meet us and they said I was white as a sheet. I remember that I was shaking but I was so happy to finally be home. I don't know why I was shivering and dizzy after the surgery but I assume that it was just my body being really exhausted after everything. The recovery was really fast once we got home, though, and in a week I was already able to walk short distances without getting vertigo and I didn't start shaking as easily anymore.

Even though the birth didn't go well at all, the baby was born healthy and crying, which they said was an excellent sign.

Life with a baby has been amazing! I just told Eerikki that I've never been this sleep deprived but it makes no difference, maybe it's hard to care when you're so incredibly happy.